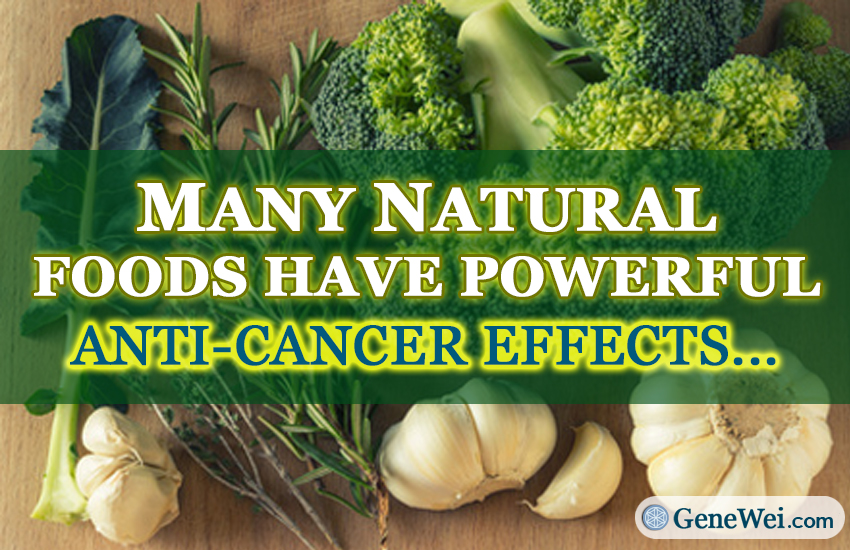 Many natural foods have powerful anti cancer effects… Lean how to maximize them.

Many natural foods have powerful anti cancer effects… But studies have revealed that preparing certain food in certain ways can decrease, or even increase their cancer fighting properties. In these cases, knowing how to prepare these foods correctly can be just as important as eating the food itself.

So today we’re going to talk about:

Broccoli is perhaps the most commonly eaten anti cancer vegetable. This popular vege, along with the other cruciferous vegetables, should be a fundamental ingredient in any anti cancer diet.

The health benefits of broccoli come from the sulphur compounds that it contains. These compounds not only help the body fight cancer, but they also stimulate the body’s main detoxification mechanism called Nrf2. The most well known of these broccoli compounds is “sulforaphane…”

But to get the most sulforaphane from your broccoli, you’ll want to prepare the broccoli correctly.

Heating the broccoli will neutralize epithiospecifier protein (which is good), but too much will also kill of the myrosinase enzymes (which is bad).

So you have 2 options to get the most out of broccoli. 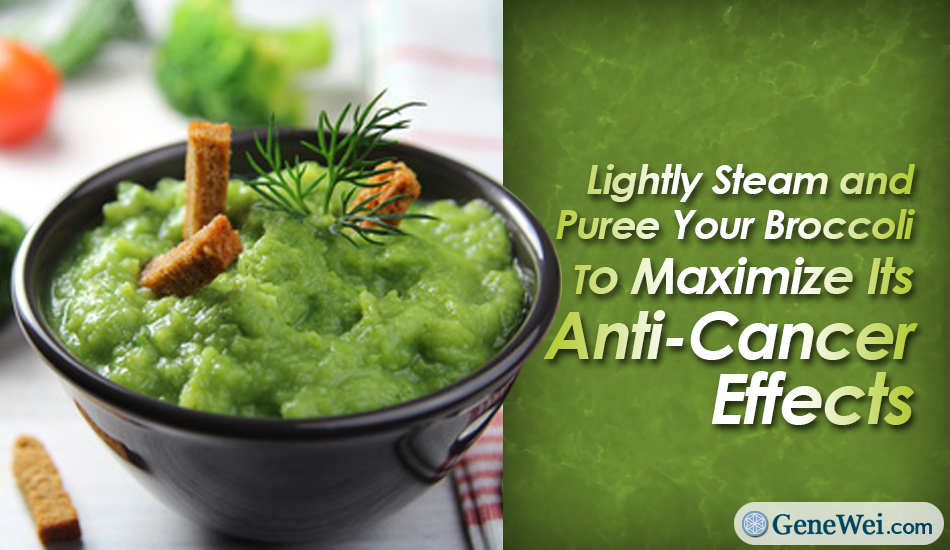 Broccoli is a great anti cancer food. But known how to prepare it is important to maximize its benefits.

Garlic is one of the most the most potent anti cancer vegetable there is. This is what scientists discovered when they tested extracts from 34 different vegetable extracts for their cancer killing effects (7). Garlic was one of the clear winners when it comes to killing cancer cells.

Beyond this, garlic has other health benefiting properties including the ability to stimulate your detoxification systems (8). It also has potent antibacterial effects and antifungal effects (9)… and can even help to fight against drug resistant strains of the E.coli bacteria.

The major health promoting substance in garlic is “allicin.” But much like the sulforaphane in broccoli, the allicin in garlic has to be converted from “alliin.” And for this to happen, the garlic plant cells need to be crushed. This releases the alliinase enzyme, which can then work to convert alliin to allicin.

So you have 2 options to get the most anti cancer effects from garlic (10). 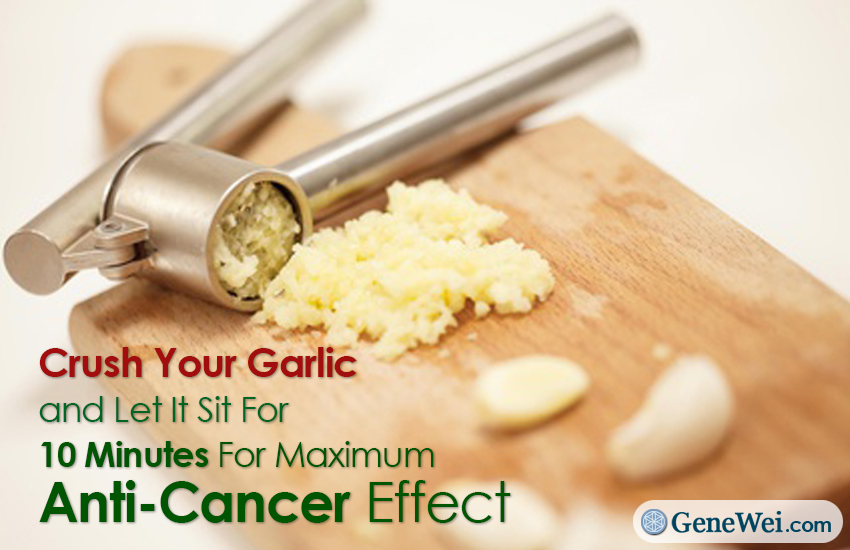 Garlic is one of the best anti cancer foods. Crush it and let it sit for 10 minutes to maximize its effects.

Green tea is something that everyone should include in their daily routine. It has a wide range of health promoting benefits including anti cancer, fat burning, physical performance enhancing, and brain supporting effects.

For people who use green tea instead of coffee, it’s benefits come from a combination of caffeine (in lower amounts than coffee), along with an amino acid called “L-theanine” (11). This amino acid increases the brain chemical “GABA” which helps to calm the brain. But it also increases the dopamine and serotonin to help you focus, while remaining calm at the same time. This is why green tea often “feels different” to people than coffee.

But in terms of cancer, one of the main protective chemicals in green tea is called “EGCG” (Epigallocatechin Gallate). This is a polyphenol that has shown to reduce cancer promoting gene expression, promote “cancer cell suicide,” (12) and help to block tumor invasion and tumor blood vessel growth (13).

However, to get the most out of your green tea, there are certain things that you can do… and other that you may want to avoid.

Overall, lemon juice was the most powerful of the citrus juices. But you can also use lime juice, grapefruit juice, or orange juice. And while even a 10% mix of citrus juice showed some benefit, you’ll want to include at least 20% to get a significant effect. 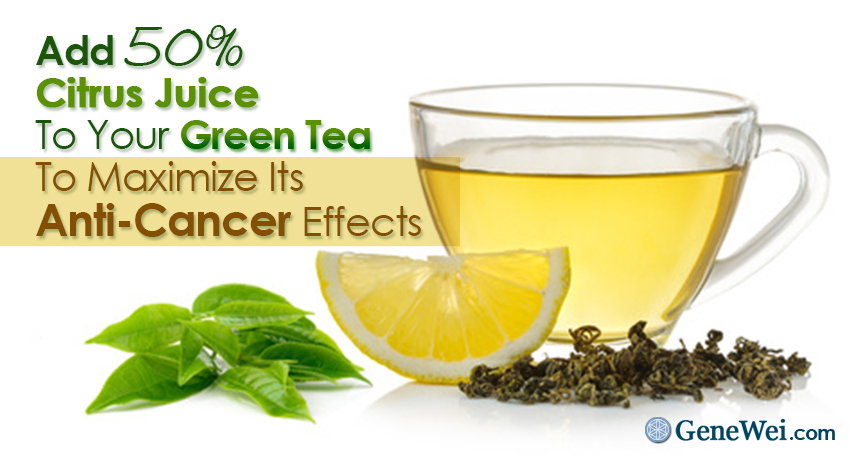 Avoiding putting milk in your green tea… Though the research is mixed in this area, adding milk to your green tea could decrease the available EGCG. It’s also possible that the milk could reduce its anti cancer and antioxidant effects (17,18). Part of this may depend on how much milk you add to your green tea, and how much fat and protein it contains. But to be safe overall… just add citrus instead.

When you are fighting a chronic illness, or just want to be optimal, you should do everything you can to get the most out of your meals. Knowing these simple food tricks, and including them into your daily routine is an important first step.

So let’s do a quick recap of how to maximize the effects of these anti cancer foods:

If you like to cook your broccoli thoroughly… combine it with a myrosinase rich food. This includes broccoli sprouts, mustard, mustard seed powder, radish, daikon radish, horseradish, or wasabi. The spicier the better.

So start including these simple and health promoting tricks into your daily meals. Your body will thank you for it. 🙂

Did you know about these health promoting food tricks? Are your current cooking methods decreasing the health benefits of these foods? Let us know below and share!

More from my site 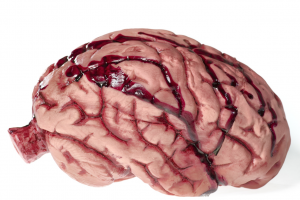 It’s undeniable… many people are addicted to sugar. In fact, the average person consumes over 77 pounds of sugar each year [1]. This comes out to nearly a quarter pound of sugar each day! We all know that sugar can be bad for your health… especially when it’s eaten in excess and outside of its […]